There’s a nice chart in today’s New York Times, part of which I’m taking the liberty to reproduce here; it shows were Donald Trump stands in the ranks of elected presidents with respect to their share of the popular vote.  Only one president was selected by the electoral college with a greater deficit, Rutherford B. Hayes.  Aficionados of US history will recall that Hayes triumphed as a result of the Hayes-Tilden deal which ended Reconstruction, an event many regard as the greatest scandal in our nation’s political record.  Hayes, then Trump. 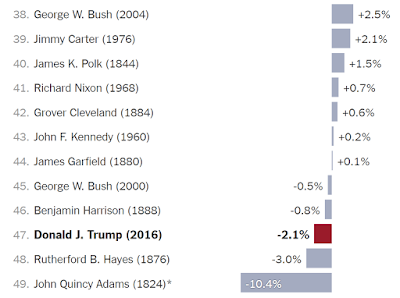 Note that Adams was selected by Congress; the rest were annointed by the electoral college.

As Obama is not even on the chart, what it also is a chart of just how badly Hillary Clinton did.

Actually the NYTimes chart shows all of the election. Harding and Coolidge had the two largest popular vote margins? Weird.

Just to be clear, I excerpted the chart to focus on the presidents at the bottom. Most of them came in above a positive 2.5% popular vote differential. I had a very narrow intention, to show that the only time the electoral college performed a greater reversal was when electors were part of a horse trade to throw the outcome.