All play and no work makes Paul Krugman a tinfoil hat conspiracy theorist. 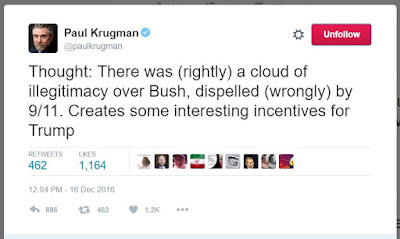 What is Krugman's implicit assumption in the above tweet? That 9/11 was a false flag operation? That Donald J. Trump is not merely an untrustworthy demagogue but a ticking time-bomb? Can you see why implicit assumptions attributed to someone by somebody else are not valid?

Nearly 20 years ago, in an essay titled The Accidental Theorist, Krugman wrote:

Greider's theorizing is all the more speculative and simplistic because he is an accidental theorist, a theorist despite himself--because he and his unwary readers imagine that his conclusions simply emerge from the facts, unaware that they are driven by implicit assumptions that could not survive the light of day.

Greider's "accidental theory" was the infamous lump of labor fallacy -- the supposed implicit assumption that "there is a fixed amount of work to be done in the world, so any increase in the amount each worker can produce reduces the number of available jobs."

Posted by Sandwichman at 8:45 PM

I read Krugman otherwise; 9/11 made Americans largely forget about the disputed election. Trump now trails Clinton by over 3 million votes. Krugman asks: Is there a lesson there for Trump?

So, of the choices you present, 'ticking time bomb' is probably the closest to what Krugman is saying - but is that really much of an assumption? We've already seen him in action as P-E. It seems more like a fait accompli.

The only reason to whine about your post, S-man, is that there are a whole lot of right wingers out there having absolute scheiss fits over this tweet by PK. Probably he should not have done it, but I agree with Kevin that there really is no implication in it that Bush was behind 9/11. It was just nicely convenient for him, and I remember well that after he gave his first main speech after it his popularity ratings were up there around 90%, kind of like his dad's at the end of the first Gulf war.

So, I have no doubt that Trump at some level understands the lesson here, which is not go out and have several thousand people in the US die from a terror attack you organize, although that is what all the right wing critics are charging that PK is suggesting. Rather the same effect can be achieved by other sorts of foreign policy "wag the dog" behaviors, such as ginning up a nice little war with China or somebody else, which he seems to be well on his way to doing as it is already.

Yes, I know about the right-wingers having shit-fits. This post was, in part, a response to that. The Donald himself has called the Krugman post demented, although not referring to Krugman by name. My first point, which I have made in an admittedly awkward way, is that the accusations against PK are unfounded, based on ATTRIBUTED "implicit assumptions".

My second point, though, is that PK has played that attributed implicit assumption game, too. Moreover, that sleazy game has been played over and over by economists with regard to trade, immigration, retirement and technological unemployment.

One might even say that attributing outrageous implicit assumptions to opponents enabled elites to ignore the harmful consequences of policies on large segments of the population, regardless of whether those consequences were real or only perceived.

See my earlier post, Did Jonathan Portes Cause Brexit

See also: Welcome to the Amusement Park at the Edge of the Abyss

I tried to tell them. I really did. I wrote a letter to Paul Krugman that he never replied to. I carried on an email exchange with Jonathan Portes, who graciously indulged my ignorant, obviously fallacious opinions. I nattered at Brad DeLong, who blocked me on twitter. I posted to EconoSpeak. All to no avail. Knee-Oh-Liberal Uber Alles...

The experts were not even wrong. They didn't know what they were talking about. They just copied from one another, assuming the guy they were copying from had the right answer. But that guy was just copying from somebody else...

On June 24, the day after the Brexit vote, I wrote:

"So it turns out the establishment telling people they are a bunch of foolish xenophobes is not an effective electoral strategy. I wonder if the DNC is paying attention? I doubt it."

It turns out the DNC was not paying attention. I was not surprised.

Here is the thing... on July 3, I asked, "Why Are Experts Ignoring Voters?" correcting the title of an LSE blog post that wondered why voters were ignoring experts, as if it was the voters job to listen to the experts and not the other way around.

Then on August 31, I asked "Did Jonathan Portes Cause Brexit?" I answered my own question by concluding that he probably didn't because probably nobody paid much attention to him.

But my point in all this is that the BOGUS "lump-of-labor fallacy" is a weapon of mass destruction that can do tremendous harm in the wrong hands and the "experts" irresponsible handling of this canard insured that it would get into the wrong hands.

In another post from June 24, I quoted Ann Petifor:

"If, as a result of Brexit, the economy crashes it will not vindicate the economists, it will simply illustrate once more their failure."

The big secret consensus behind "free trade" agreements, flexible labor market policies, austerity and expedited immigration is the professional faith of economists that wages are too damn high, that lower wages will be good for GROWTH and growth is good. Wage earners are not supposed to notice or, rather, are supposed to be grateful for the bounty that the restriction of their wages has unleashed.

To the great dismay of the experts, the voters were not grateful. Thanks, experts, you did this.

Krugman has jumped the shark:

www.nytimes.com/2016/12/16/opinion/useful-idiots-galore.html
«On Wednesday an editorial in The Times described Donald Trump as a “useful idiot” serving Russian interests. That may not be exactly right. After all, useful idiots are supposed to be unaware of how they’re being used, but Mr. Trump probably knows very well how much he owes to Vladimir Putin. [...]
But let’s be honest: Mr. Trump is by no means the only useful idiot in this story [...], bad guys couldn’t have hacked the U.S. election without a lot of help, both from U.S. politicians and from the news media. [...]
The pro-Putin tilt of Mr. Trump and his advisers was obvious months before the election [...]
By midsummer the close relationship between WikiLeaks and Russian intelligence was also obvious, as was the site’s growing alignment with white nationalists.»

Smearing at the same time Trump, Wikileaks and Putin with delusional innuendo, a major achievement. I think that B Sanders would have been a lot better than D Trump, but the behaviour of the clintonite fanatics disgusts me.

From the arguments of Krugman and other pundits (especially during the Corbyn debates), and following the line of "The Economist", which is the leading mouthpiece, I get the impression that for the "establishment" current neoliberal economic policy is somewhat negotiable, especially after the "Leave" and USA election votes, at least as to talk, but neocon foreign policy is not negotiable, and extreme displays of neocon attitudes are necessary to keep a platform on main-stream media.

Those large segments of the populations were supposed to be disenfranchised by first-past-the-post in the UK and by block-vote in USA presidential elections, and by abstaining from vote and being given an alternative between two neoliberal neocon parties in both countries.

It did not quite work like that; in the UK referendum because the vote was proportional and involved a real choice, and in the USA presidential election because the block vote swung against unexpectedly in a half a dozen states, a bit like FPTP swapped SNP for Labour in Scotland.