One of those Matadors of the Culture Industry 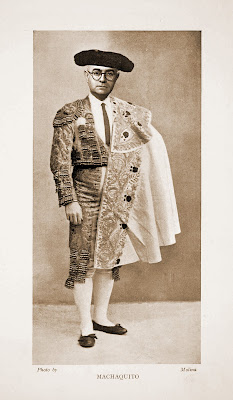 When Theodor Adorno referred to "one of those matadors of the culture industry," in his "Free Time" radio lecture, he was presumably referring to the idols of stage, screen, television, or recording studio who are the staples of the supermarket tabloid personality cult.

Oddly, though, his construction of the paragraph leaves open the interpretation that Adorno himself is "one of those  matadors" and the "culture industry" is the bull he is fighting. After all, he and Horkheimer coined "the culture industry" more than 20 years earlier.

The above repeats part of what was in my earlier post on Politics as a Hobby*. This post adds a photomontage of Adorno in a matador costume.

I read the essay again, with notes to myself, and think it grand. But, Adorno survived because politics was a matter of life in the 1930s and explained to us what the Nazis were culturally and that makes Adorno especially valuable as a principled thinker.

What splendid work you are doing, and, yes, it is work and difficult work. I value your work, highly.