The subtitle of T. R. Malthus's Essay on the Principle of Population advertised its inclusion of "remarks on the speculations of Mr. Godwin, M. Condorcet, and other writers." In volume I of Capital, Marx did not mention William Godwin's name.  One might say, rather, that Marx studiously avoided mentioning Godwin. He did, however, engage in a sustained disparagement of Malthus -- particularly his essay on population. This alone would make Marx's silence on Godwin remarkable.

Consider the following "exchange" between Godwin, Malthus and Marx: 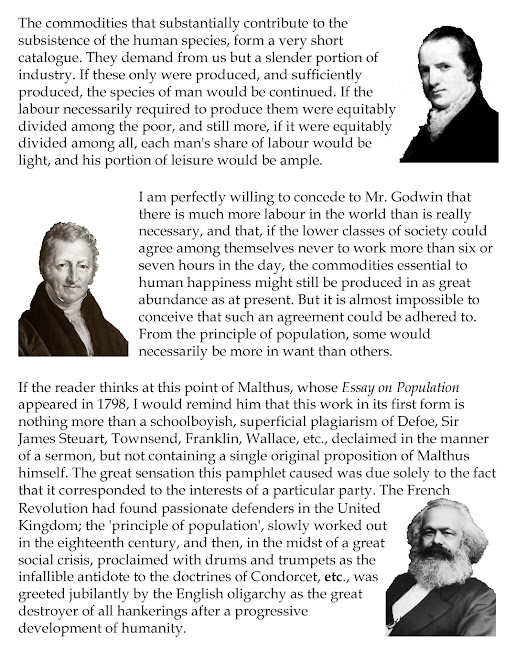 Godwin's name appears first in the subtitle of Malthus's essay. "Godwin" appears 63 times in the essay and "Godwin's" 37 times. "Condorcet" appears only 14 times and "Condorcet's" 11. The essay was primarily a response to Godwin. But Marx referred to the essay as having been celebrated by the oligarchy as "the infallible antidote to the doctrines of Condorcet, etc. ..." The  etcetera stood for the suppressed name of Godwin (u.a. -- und andere -- in the original German).
In his The Condition of the Working Class in England, Engels had cited Godwin, along with Jeremy Bentham, as "two great practical philosophers of latest date" and had singled out Godwin especially as "almost exclusively the property of the proletariat" upon which the latter had developed "a literature, which consists chiefly of journals and pamphlets, and is far in advance of the whole bourgeois literature in intrinsic worth."
In March of 1845, Engels wrote to Marx recommending the exclusion of Godwin from a proposed library of the history of socialism  "despite the many excellent passages in which Godwin touches on communism." The reasons for leaving Godwin out were his "anti-social" conclusions and the prospect that Marx was going to write a "complete critique of politics." Subsequently, in his 1861-63 manuscripts that were published as Theories of Surplus Value, Marx explicitly excluded Godwin from his historical review of theories of surplus value:

These reviews are only intended to show on the one hand in what form the political economists criticized each other, and on the other hand the historically determining forms in which the laws of political economy were first stated and further developed. In dealing with surplus-value I therefore exclude such eighteenth century writers as Brissot, Godwin and the like, and likewise the nineteenth-century socialists and communists.

Marx did, however, review Malthus's 1798 essay, in which he criticized Godwin -- including passages from The Enquirer, published the year before -- making this oddly specific exclusion also peculiarly self-contradictory. Was there perhaps an more substantial reason for the omission?
In The Right to the Whole Produce of Labour, Anton Menger disputed Engels's account, in the preface to volume 2 of Capital, of the origins of the theory of surplus value, declaring that, "The real discoverers of the theory of surplus value are Godwin, Hall, and especially W. Thompson."
Engels scoffed at Menger's insinuation that Marx's citations in Capital were intentionally deficient, dismissing the absence of reference to Godwin as a trivial exception to an otherwise comprehensive scholarly apparatus: "nowhere does he [Menger] quote a single English author not already quoted by Marx, apart from perhaps Hall and world-famous people like Godwin, Shelley's father-in-law."
Godwin was, in fact, Mary Shelley's father and thus Percy Shelley's father-in-law. That was an obvious diversion. More relevantly, Godwin was the author of An Enquiry Concerning Political Justice and The Enquirer and it was in that capacity that Malthus criticized his views. Engels, of course, knew this. He knew that "Shelley's father-in-law" wrote "many excellent passages in which Godwin touches on communism." Engels knew that Godwin's practical philosophy had spawned a worthy proletarian literature. Engels was gaslighting.
Ironically, in their endeavor to inflate Marx's genius and originality, Engels and Marx obscured the substantive core of his contribution, which was heroic in its own right. Parts of that contribution were derivative. In itself, that is not a bad thing. It simply acknowledges the collective nature of the "general intellect." But there is now the residue of 150 years of the Marx sui generis cult to deal with. Even Marx acknowledged, albeit obliquely, that it would be an anachronism to regard him as the founding father of "the political economy of the working class."
In his inaugural address to the International Working Men's Association, Marx hailed passage of the English Ten Hours' Bill as "not only a great practical success; it was the victory of a principle; it was the first time that in broad daylight the political economy of the middle class succumbed to the political economy of the working class." The Ten-Hour Act was passed by parliament in May of 1847. Marx, of course, was unknown in England at that time and his study of political economy and collaboration with Engels had only begun a few years earlier.
So where was this "political economy of the working class" to be found that Marx had extolled in his inaugural address? It was, according to Engels, contained in the journal and pamphlet literature formed on the basis of the reception by the working class of the practical philosophies of Bentham and Godwin.
Posted by Sandwichman at 3:00 AM

After a couple of close readings, I have no sense of what idea I am supposed to be left with after the readings. The scholarship is evident and thorough, but what idea or ideas should I gain from the readings?

I suppose sometimes my essays fail to communicate, anne.

I even returned to:

but still do not have a central idea for this short essay. I always appreciate all your writing, but here I am lost for a central idea.

Thank you for reminding me of the very beginning of this long series of posts six months ago. I may need to go through them as I try to make sense of what I am trying to say. The "central idea" of this post is the series of quotes from Godwin, Malthus and Marx arranged as if they were a conversation. Godwin makes a proposition, Malthus admits the logical possibility of the proposition but raises practical obstacles to its feasibility. Marx then lambastes Malthus and snubs Godwin.

Marx was right about the reactionary politics of Malthus's population principle. His personalized hostility toward Malthus, however, obscured his argument to the extent that Marxists typically read the vituperation as a total refutation of Malthus's argument, when in fact it was only a partial refutation.

"The law of capitalist production, that is at the bottom of the pretended “natural law of population,” reduces itself simply to this: The correlation between accumulation of capital and rate of wages is nothing else than the correlation between the unpaid labour transformed into capital, and the additional paid labour necessary for the setting in motion of this additional capital."

Marx's repudiation of Malthus does not return the conversation to Godwin's speculations. Marx abstained from "ruthlessly criticizing" Godwin. One can only wonder why. Indeed, Marx obliquely endorsed, in principle, Godwin's position in his inaugural address: "social production controlled by social foresight, which forms the political economy of the working class." In my estimation, Marx appears to have hidden the lamp of his critique under the bushel of animosity toward vulgar economists and diffidence toward his sources.

Wow, there is just the focus I needed. I needed this explicit repetition, and know just how to use this series now. This is terrific and necessary scholarship.

Wonderful post, and my quibble is minor, but u.a. is "unter anderen", "among others".

Most of the time Marx dumped on Malthus strictly for political reasons, that Malthus in effect blamed the poverty of workers on their immorality, their inability to keep from reproducing the minute their living standards started rising. This was a pretty legitimate complaint.

Where Marx made his more analytical critique was actually in Vol. II of Theories of Surplus Value, where he blasted the foundation of Malthus's confabulation of "linear" food growth and "geometric population growth," supposedly the key to the inevitable immiseration. Marx noted that all populations grow "geometrically," that is exponentially. The question becomes what might limit this, which indeed might be land fixity. As it was, Malthus himself realized he had a problem with this and changed his story in the third edition of the Essay on the Principle of Population, which kept getting longer and longer in later editions, the first one being barely longer than an extended pamphlet.

I suspect another reason Marx and Engels did not like Godwin was because he was an anarchist. Heck, he coined the term. Even though Marx would declare that in the higher stage of socialism, "the state will wither away," the two of them in practice were always at odds with anarchists, notably Proudhon and Bakunin.