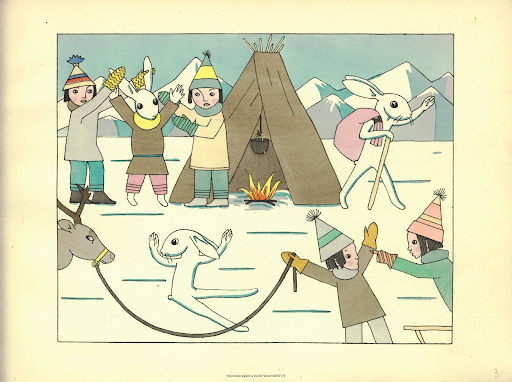 The hare was a child so badly treated and offended by the other people because he had such long ears that he went off to live alone.

When he sees someone, he puts his ears back; for when he hears a man's call, he thinks they are talking about his long ears. He doesn't have a tail because he didn't have one before.

Walter Benjamin's "Program for a proletarian children's theater" was not published during his life. According to Jack Zipes, the editors of  Alternative: Zeitschrift für Literatur und Diskussion (presumably Hildegard Brenner) who published Benjamin's short essay in 1968, the executers of Benjamin's literary estate, Theodor Adorno and Rolf Tiedemann, had suppressed its publication because they "wanted to play down Benjamin's Marxist position." This is, of course, hearsay but I mention it to indicate the constellation linking Benjamin and Adorno and thus possibly Benjamin's program and Adorno's "Free Time."
Aside from his almost comic self-portrayal as a virtuoso of seriousness, Adorno offered no prescription for a free time that would be free of culture industry colonization and do-it-yourself pseudo-activity. Benjamin, on the other hand, offered a program, albeit one designed for children in a post-revolutionary regime.
I refer here to the essay by Walter Benjamin but it needs to be acknowledged that practice was initiated by Asja Lācis in her work with war orphans and homeless children in the aftermath of World War I and the Russian Revolution. So while the possessive refers to Benjamin's essay about the program, it should be kept in mind that there was an actual "proletarian children's theater" pioneered earlier by Lācis.
Although Benjamin's program can't be directly applied to the problem of adult leisure in a capitalist society, there are hints that invite fruitful speculation. Benjamin's program envisions theater as a frame rather than a method because "only on the stage does all life, in its unlimited fullness, appear framed and as a circumscribed area." Children are to be educated within this relevant area rather than being educated to an idea, which is to say indoctrinated.
Improvisation is to prevail within the circumscribed area of theater. Benjamin's concept of theater displaces performance to the sideline, as an afterthought. The improvisation of the various elements of scenery, costume, character, music and dialogue is aimed at the development of the children, not at the performance of a finished product. In fact, Benjamin envisions improvisation continuing even during a performance in front of an audience. There are no boundaries to the continuing creativity of the participants.
Undoubtedly there are some who would see a theatrical frame as a potential remedy for the paradoxes of free time that isn't free. But there are caveats. In his radio lecture on free time, Adorno implicitly criticized the notion of directly applying the theater frame to adult leisure with regard to "a theater that today confuses itself with reality, such as the happenings* now and then staged by the actionists that muddle aesthetic semblance and reality."
Of course those happenings were never conceived as a translation of the children's theater frame to an adult context. One of great differences between Benjamin's proposal and the happenings of the 1960s is that the latter were geared to performance before an audience. They were spectacle. The participation of the public in these events was peripheral to the art-world exhibitionism. The audience members were pseudo-participants.
This is not to say that a theatrical frame could not serve as one vehicle for freeing free time. But it may be both unwieldy and prone to being carried away by preconceptions and stereotypes about drama, sensuality and make-believe. Adults carry too many props of baggage onto the stage.
Two "frames" that I see as more appropriate for the adult context are scholê and dialogue. Both can feature "all life, in its unlimited fullness" within a "circumscribed area." Scholê translates as 'leisure' and is the root of words such as 'school' and 'scholarship.' The meaning to classical Greek philosophers was radically different then our contemporary usages of leisure or school.
The dialogue I have in mind is specifically David Bohm's conception, although I don't think that has to become mandatory. I will address both scholê and dialogue in future posts and also explain why something like them is absolutely necessary to avoid, or at least address in some coherent manner, our civilization's insatiable drive toward catastrophe.
Posted by Sandwichman at 10:51 PM