An immoral or evil nature is not implied

“…To suggest that the Forestry Commission’s policy on clearfelling in dry forests is the result of ideologies does not imply any immoral or evil nature in the officers of the Commission since such ideologies are developed in an unconscious manner. If one has ever been present during a hot regeneration burn, however, it is easy to recognize the impact the event has on those involved. The fire-storm and condensation cloud as well as the immense heat are a far cry from just letting the forest grow back by itself. This active involvement that regeneration burning involves also has implications for the size of the organization, a fact that cannot be dismissed too quickly when analyzing the clearfelling decision. Every organization appears to have an inbuilt “desire” to expand.

The nature of bureaucracies and the theory of public policy can explain, in part, why the Forestry Commission employed clearfelling in dry forests. But much of the decision appears to have derived from individuals whose minds simply came made up; these people simply reasoned or justified that decision after the event as justification became more and more necessary.” [1] 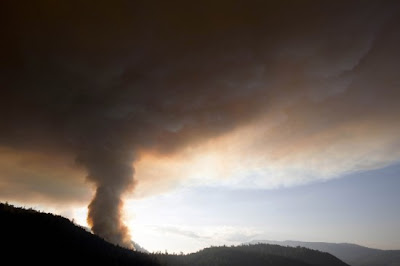 Here's how the current Australian Labor Government fobs off attempts to regulate deliberate and unnecessary forestry infernos; by pretending that all biomass burns are acts of nature beyond the Government's control:

“If a country chooses to account for any Article 3.4 activities [Kyoto Protocol forest management], it must include, and report on, all emissions from all land nationwide on which those activities are undertaken. Australia has elected not to include any such activities because of the risk that random natural events, such as drought or bushfire, could result in significant emissions from those sources during a commitment period.... [If] natural events such as drought and fire result in the release of greenhouse gases over much shorter periods...[if they were] counted towards Annex I countries’ targets, then countries subject to natural disturbances would have no control over meeting or exceeding their targets...." [2]


The Federal and State Governments have amended the 'Regional Forest Agreement' to ensure that our law courts are unable to insist on real protection for the environment and people. Watering the RFA down to say "only that regard be given to the assessment of environmental, social, cultural and economic values..." [3] Effectively, that means that 'anything goes' (ie business as usual).

[Pictures of intense industrial forestry burnoffs in Tasmania were taken by Rob Blakers.]

Posted by Myrtle Blackwood at 10:41 PM