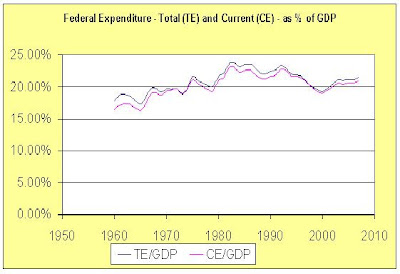 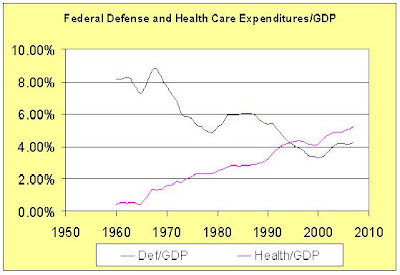 Rahm Emanuel, the incoming White House chief of staff, has said, “You don’t ever want to let a crisis go to waste: it’s an opportunity to do important things that you would otherwise avoid.” What he has in mind is not entirely clear. One possibility is that he wants to use a temporary crisis as a pretense for engineering a permanent increase in the size and scope of the government. Believers in limited government have reason to be wary.

He precedes this suggestion that President Obama is a big government liberal (at least he did not use the term socialism) with:

This presentation is misleading in a couple of ways – which is why I’ve presented two graphs (both using data from this source). The first graph shows Federal expenditure (both total and current) as a percent of GDP. Notice that Federal spending as a share of GDP was about as high in 1985 as it is projected to be for 2019. Also notice that Federal spending as a share of GDP fell during the term of our last Democratic President only to rise under that Republican President that Greg Mankiw served. To be fair – much of this variation came from changes in the defense spending to GDP ratio and not from changes in domestic Federal spending as our second graph shows.

Our second graph also show Federal health spending as a share of GDP, which has risen from 0.5% of GDP in the early 1960’s to over 5% in the last few years. Part of this increase is attributable to changes in what the Federal government covers during George W. Bush’s tenure in office but we should also note that total U.S. health expenditure (public and private) as a share of GDP has been rising and is expected to continue to rise. Given this reality – I’m surprised that the projected share for 2019 is not higher than 22.6%.

Update: A New Era of Responsibility - Renewing America’s Promise does show that the projected Federal outlay to GDP ratio for 2019 under President Obama’s proposed changed in the budget will be 22.6% as Greg claims but what Greg did not tell us is that the baseline budget projected Federal outlays to be 23.2% of GDP by 2019. The document has all sorts of details including the projected increases in Medicare and Medicaid as well as the proposals to reduce defense spending relative to what is in the baseline budget.
Posted by ProGrowthLiberal at 11:04 AM

The budget assumes that the economy will come back in a year to Bush-like growth... because of the Clinton experience maybe? But he had weak growth through '95.

And I wouldn't count on that defense budget... negative growth across the world, you're going to see some good wars.

Why is it "unfair" to criticize the Republican fascism? and to excuse the social costs?

From the cited document which was written by Mussolini himself:
"Fascism, the more it considers and observes the future and the development of humanity quite apart from political considerations of the moment, believes neither in the possibility nor the utility of perpetual peace. It thus repudiates the doctrine of Pacifism -- born of a renunciation of the struggle and an act of cowardice in the face of sacrifice. War alone brings up to its highest tension all human energy and puts the stamp of nobility upon the peoples who have courage to meet it. All other trials are substitutes, which never really put men into the position where they have to make the great decision -- the alternative of life or death.... "

This same observation applies to the cost of government if government includes insurance and other necessary functions that are more efficient due to returns to scale. The actual per capita costs of government systems such as SS are less than would be the case in a private system yet the costs are painted as an increase in government bloat by the rightarded. The real measure is the per capita quality of life and a large part of that is measured in leisure.