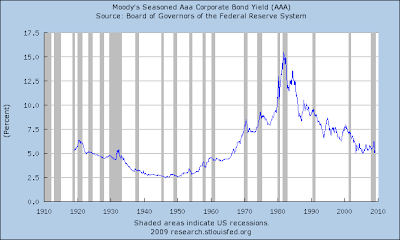 Kenneth Rogoff is worried about how rising government debt will lead to higher interest rates:

No one yet has any real idea about when the global financial crisis will end, but one thing is certain: Government budget deficits are headed into the stratosphere. In the coming years, investors will need to be persuaded to hold mountains of new debt. Although governments may try to cram public debt down the throats of local savers (by using, for example, rising influence over banks to force them to hold a disproportionate quantity of government paper), they eventually will find themselves having to pay much higher interest rates as well. Within a couple of years, interest rates on long-term U.S. Treasury notes could easily rise 3 per cent to 4 per cent, with interest rates on other governments' paper rising as much, or more ... In research that Carmen Reinhart and I have done on the history of financial crises, we find that public debt typically doubles, even adjusting for inflation, in the three years following a crisis. Many nations, large and small, now are well on the way to meeting this projection.

As of March 5, the interest rate on 30-year Treasury notes was only 3.5%. Unless the market is unaware of this fiscal forecast, one would think that the market has priced in its view on these matters and apparently does not share Rogoff’s pessimism.

Mark Thoma is not so full of “gloom and doom”:

While Mark was kind enough to mention this post, all I noted was the White House’s own projections of Federal spending, which do not indicate that President Obama has some big government agenda (as Greg Mankiw tried to suggest).

Our chart shows the interest rate on AAA long-term corporate bonds from January 1919 to February 2009. Interest rates did not skyrocket after World War I or World War II. One reason is that long-term fiscal policy turned to retiring the Federal debts generated by these two wars. It is true that the Reagan fiscal fiasco led to higher real interest rates – even as supply-side worshipers of St. Ronnie love to talk about what happened to nominal rates. Long-term interest rates have been relatively low in recent years even in the face of Bush43’s fiscal irresponsibility. I would suspect that if the Obama Administration delivers on its promise of long-term fiscal responsibility, we can avoid Rogoff’s pessimistic forecast.
Posted by ProGrowthLiberal at 8:00 AM

Interesting post. Could you please point to a link or explain the "real" vs. "nominal" Reagan interest rates. Thanks!

The idea of government spending to offset a demand deficit is practically orthodoxy for most establishment economists (and liberal bloggers). And (in other contexts) they're perfectly cool in principle with a government that controlls a money supply based on fiat currency.

But nobody (aside from a few greenbacker or SocCred "money cranks") ever thinks outside the box regarding the assumption that the deficit has to be financed by selling government bonds. If the amount of the spending is calculated to fill the demand gap and employ idle factors, without being inflationary, why doesn't the government just spend it into existence *without* selling any bonds? Surely the mere fact that the government isn't paying debt to rentiers doesn't make it any more inflationary than it otherwise would be.

The reason our l.t. interest rates have been low has everything to do with large non-economic buyers: China, oil exporters, and other emerging markets. This is well-understood by the markets and economists.

Unlike previous years, the growth in foreign exchange reserves of those countries has slowed, leaving them less to invest in Treasuries AND agencies (one must take them together as both are now de facto obligations of the government). More important, the $2.5tr in Treasury financing needed for this year DWARFS China's expected reserve growth of about $300b. In previous years, China's reserve growth has been about 70% or more of Treasury financing needs.

Why haven't markets reacted more strongly to the above news? There was a one time shift out of risk assets and into Treasury safe havens as the crisis accelerated. That does not happen over and over. This explains why long term Treasury rates have been steadily rising in the face of abysmal economic news.

What I am laying out here is ALL George Bush and the Fed's fault. However, just because I'm on Obama's side doesn't mean I'm going to blind myself to the potential risks of our unprecedented government intervention in the economy. Nor should you.

Because the debt implies that the inflationary policy is temporary and will be followed, in fat, times with government surpluses paying down the debt. This is what came to be lamented in the U.K. in the 1950s as "stop-go."

The past thirty years have make it perfectly clear that the pay back promise is hollow. It won't happen because it can't happen. The next Clintonesque budget surplus will be followed by a Republican tax cutting landslide.

Reagan proved that deficits don't matter, according to Dick Cheney, so Rogoff is a double-heretic !

With respect to Kevin C's deficit financing comments: I think it could be a reasonable analogy to speculate on the impact of gold as an economic medium if governments could 'invent' gold reserves. What would be the short and longer term impacts on both its (golds) value and the psycholgy of suppliers, traders and consumers.