A colonial evil that perpetuated and increased itself 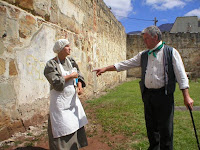 [On the left a photo taken by myself in 2007. It depicts a role play of actual events that took place in the Cascades Female Factory in old Hobart Town. It is enacted in the ruins of the actual institution. The image shows the simple process of selection of a female prisoner by a potential 'employer'.]

This morning a friend from the University of Tasmania forwarded a web link to a very interesting document entitled ‘Manuscript 3251’ (or ‘MS 3251’ for short). The official description goes:

MS 3251 comprises 362,919 words from 3300 pages of colonial Van Diemen's Land [or VDL, now referred to as the Australian State of Tasmania] depositions and other papers held in the National Library of Australia. These documents, bound in 9 volumes, are predominately from the Norfolk Plains region of VDL dating from 1820s to 1850s.

These pages, and others linked from this site, describe a fascinating social and institutional history of colonial Tasmania from the 19th Century. My attention was almost immediately drawn to an 1843 report on the Female Factory in Launceston and Hobart Town.


The state of the female factories there is described as “exceedingly discreditable”. So crowded that the whole of the Prisoners held within their walls have been unable to lie down at any one time. Some are forced to stand to make room.

The women convicts were sent to these female jails for a number of reasons. Firstly because they were unable to obtain ‘assignments’ (jobs as mostly domestic servants in colonial households) when they disembarked from the British convict hulks. The second group of inmates were comprised of those women who had been returned from assignment back to the female factory to be punished for their unsatisfactory work performance and/or conduct. Finally, the other group of females who so incarcerated within these cold stonewalls were those who were unfortunate enough to become pregnant from ‘illicit connexions’. Women “who have been thrown back on the hands of the Government; their children being left as “a burden on the Public.” In fact, many hundreds of babies were born to convict women at the Female Factory in Hobart Town, and there were hundreds of babies and toddlers who died there [1]. Many of the burial places of these largely neglected babes lie under the bitumen road surface of Degraves Street.

“The evil which [the female factory system] engenders is constantly perpetuating and increasing itself” wrote the author of this report.

“…. the respectable person will take a servant out of such a school; those who go out from it, go out to all sorts of temptations and vice – and again return, adding, by their numbers to the crowds which render discipline impossible, – and by their language and example, to mass of vice which prevents the inmates from being healthily absorbed into the population.”

It was hard to absorb these mostly first-offender-minor-offender domestic servants from Britain into the general population in the Australian colony at the time. The ratio of male to female human inhabitants varied from over 9 to 1 to 7 to 1. A very large portion of the population was convicts or former convicts. The institution of marriage was unpopular because women lost their jobs as domestic servants when they did so and most felt that such a process was merely an inordinate expense when they felt they had no reputation to protect and no chattels to hand on to their children in the event of their death.

Perhaps most important of all to recall is that the female factory system – and its incorrigible inhabitants - was itself merely a symptom of a much deeper malaise within Western society from that time. Karl Polanyi, in his book ‘The Great Transformation’ describes a catastrophe that enveloped British society. “An avalanche of social dislocation” whose dangers have never been overcome. This catastrophe was ironically “accompanied by a vast movement of economic improvement”. [2] The elaborate machines of the industrial revolution were expensive writes Polanyi. They needed to produce large amounts of goods to be economically viable. Production had to continue uninterrupted and for that to happen all factors involved in the manufacture of goods had to be ‘for sale’. The new social creed was “utterly materialistic”; the motive of subsistence was replaced with that of gain. [3]

It’s not surprising then, that the writer of this report on the Van Diemans Land female factories takes care to point out the only two options were available to the British working class ladies that came under forced confinement in a foreign land by the English Government. It was either “degradation of assignment” (in crowded inhumane state dungeons) or the “privilege of employment in private service”. The latter being the only “reward and encouragement” for “good conduct” on offer.

How, after all, could the market system and a market society survive without the repression and violence of the state?

[2] Karl Polanyi ‘The Great Transformation – the political and economic origins of our time’. First published in 1944. Beacon Press. Page 40.

[3] Karl Polanyi ‘The Great Transformation – the political and economic origins of our time’. First published in 1944. Beacon Press. Pages 40-42.

Posted by Myrtle Blackwood at 3:52 AM

"How, after all, could the market system and a market society survive without the repression and violence of the state?"

Why does this remind me of slavery in America pre-Civil War? What brought about the end of this? Do any remnants continue to the preent day?

Shag-F-B
The female factory in Hobart Town closed in April 1877 when the existing inmates were transferred to another jail.
http://www.femalefactory.com.au/gaol.htm#Closure

The system of assignment of females to private employers changed, I understand, to one where the women were given (all or generally?) a compulsory minimum sentence and then offered probation for good behaviour. Ticket of leave was offered eventually.

The colonial and English government observed (as per the report referred to in my article) that the original system of assignment left no inducements for the women to engage in good behaviour. Employers (mostly male) tended to choose inmates according to their appearance only.

In the 1840s the ratio of males to females in the Australian colony dramatically changed. From 7 to 1 the previous decade to about 3 to 1.

The 'remnants that continued' were (IMHO) a cultural disrespect for women in general. White Australians tended to do two things with respect to the female gender. to put women on pedestals as upright moral 'God's police'. If a woman tended to be more spontaneous and forthright in her opinions she would be more likely referred to as a 'whore'.

A male-dominated 'society' (rather than a 'culture'). No established culture. No established way of life or parenting. Children often neither seen nor heard. Pushed outside to play until teatime.

A large portion of the children of convicts and native born whites found themselves in industrial schools as orphans. These institutions were run as factories of production (usually clothing) by strict religious Orders to fulfil the commercial demands for product made by large retail stores in Sydney.

When parents don't have any experience of adequate parenting themselves they may seek that form of comfort from their children. Perpetuating a cycle of dysfunction in families that translates into wider community dysfunction.

The Australian convict era wasn't that long ago.

Brenda,
Thanks for the response, although I am saddened by it. I'm working on a pre-Civil War project that the more I get involved the more the evils of slavery are revealed to me than I had realized in my 79 years. History is too often glossed over. Reminders, such as yours, are necessary because of revisionism that seems to accommodate a better past than had actually existed.