The Narcissism of NSC-68

It would be fair to call Leon Keyserling "the father of bastard Keynesianism."

Paul Nitze: "Leon Keyserling was very helpful when we wrote NSC-68. He was my principal adviser on the economic parts." 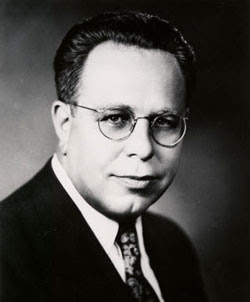 "A rotund man with an undaunted conviction of the correctness of his views." - NYT obituary


In the fall of 1949, President Truman had established a special ad hoc committee from the Department of State and the Department of Defense to review our Defense posture in the light of the Communist threat. They produced a paper [ultimately known as NSC 68] and . . . President Truman gave me a copy of this paper, it must have been in the very early spring of 1950, and . . . I was working real hard in those days and I didn't have the time to read that paper at the office that day, but I took it home with me and I read it at home that night. Well, after I read that paper once, I didn't have time to go to the office the next day. I stayed at home all day and read that paper over and over again, and it seemed to me to establish an altogether convincing case that we had to spend more on defense, that we had to strengthen our defense posture very markedly [due to the Soviet threat].

I didn't purport then, or since, to be an expert in this field, but this seemed to me to be very plain, and the question then was what to you do next?" . . . I went back to the President and . . . . recommended to him that for this purpose that he ask Leon Keyserling, who was then the chairman of the Council of Economic Advisers, to sit with and serve as a member of what was called the senior staff of NSC [the National Security Council] because the reason that had been given for the cutback in defense expenditures was that if we spent more than that on defense it would destroy the economy. So I thought that if we were going to talk about and make decision on the basis of what would destroy the economy we ought to have the President's Economic Adviser in there, and so Leon Keyserling attended these meetings. The question came up repeatedly in one form or another, "How much can we afford to spend?" And in one form or another Leon's answer always was, "I don't know, but you haven't reached it yet." He always said "You can afford to spend more on defense if you need to."

"Brilliant!" I replied humbly, "I couldn't agree more with my excellent analysis. By the way, that's a very handsome tie you're wearing there, Leon."

Keyserling is the connection between the policy of "full employment" - also known as the policy of economic growth - and the resistance of the economics profession to any discussion of work time reduction.

He is the connection to understanding why the labor movement dropped work time reduction as its most powerful demand.

Work time reduction became a forbidden topic beginning with NSC-68 because a longer than necessary individual work week and an ever expanding social work day (labor force times individual hours) made possible the resources necessary to consolidate control over Europe and contain the Soviet Union after World War II.

Today, it is the basis for realizing the Bush-Obama policy of "Full Spectrum Dominance," which, in the words of Defense Secretary Gates, will allow the US to "hedge" and "shape" the forces which pose a long term threat to continued US global dominance.

Work time reduction, therefore, is not only an important goal to give people control over their free time, it is absolutely necessary to bringing the period of international conflict to a permanent close.

This and the comment by "Anonymous" are simply way overdone. Even if Keyserling had said "we should move to work sharing and a reduction of work hours!!!" in 1949, all that would have been thrown out the window a year later when North Korea invaded South Korea in June 1950. Get real, guys.

And, for what it is worth, of all the CEA chairs ever, Keyserling was probably more focused on achieving full employment by one means or another than any other.

What, specifically, is way over done in my comment, Rosser?
I do not disagree with you that Keyserling was always a very outspoken proponent of full employment. It is the "one means or another" part I have a problem with.

I also do not disagree with you that the Korean conflict played a role in setting post-war foreign policy. But I would point out that Keyserling and Nitze had already put together NSC-68 well before that conflict.

I would also point out that the Korean conflict had already ended when Keyserling began trying to convince the labor movement to drop its demand for work time reduction in favor of "full employment."

Lastly, Rosser, I would point out that the Soviet Union and the communist bloc disintegrated 20 years ago, yet we still seem to be pursuing a military expansion which cannot be justified by any external threat.

So what now is the excuse to maintain a too long work week? To swear off any approach to unemployment which is not predicated on "economic growth?"

I see zero connection between a less-than fully employed economy and resistance to reduced working hours. I see little evidence regarding Keyserling's role regarding the views of "the economics profession" and this, although he may have played a role in influencing the labor movement at some point. Was he responsible for changing their minds and policies (that would at least amount to something)? Otherwise, this entire case is way overblown.

"I see zero connection between a less-than fully employed economy and resistance to reduced working hours."

Yes, I agree: you don't see the connection.

Look, I am open to the idea that reduced working hours may help reduce unemployment. But this effort to tie the issue to everything else under the sun, from global warming to the Cold War and the military-industrial complex, strikes me as a stretch too far.

BTW, Anonymous: Can you at least adopt a consistent moniker, if you are going to hand out this sort of assinine dreck here, please?

Was Keyserling responsible for changing labor leaders' minds and policies?

In a word, yes. See my next post. As for "the views of the economics profession," one has to start from the recognition that conservative economists were largely hostile to shorter hours from the get go. So it's a question of tipping the scales. In the specific case of Clyde Dankert, who edited an anthology on the topic, Hours of Work in 1965, Dankert's Cold War rhetoric echoes Keyserlings (and the 12 other contributors to the volume march in lockstep to Dankert's drum).

In a 1962 article, "Shorter Hours -- In Theory and Practice" Dankert concludes with the admonition, "and in view of the current cold war situation the present writer would not recommend any sizable reduction in them [hours] just now..." The idea being (as stated earlier in the article) that in time of war the priority has to go to maximizing productive output. So yes, I think Keyserling was influential in forging a consensus in the profession that was based not on economic analysis but on political conformism. And I might add, abject conformism.

Trust me, I certainly have no desire to "tie the issue to everything under the sun" and in fact at first resisted promptings to go there (NSC-68) even though I was already quite familiar with Dankert's Cold War justification for resisting hours reductions. The problem is that when I finally consented to take a closer look at the evidence, the case became too strong to overlook.

I have to confess to finding Keyserling a rather compelling figure -- in a picaresque sort of way. Reading his rants against the New Economics of the Kennedy admin and his National Archives Oral History interviews, one can't help but get the impression of a sort of policy intellectual carnival barker. His analysis is astonishingly, shockingly shallow and presumptuous but loaded with polemic and clever rhetorical ploys. It's hard to make out for sure who he thought were the bigger rubes -- the "big boys" who were the gatekeepers of what was possible and/or expedient or the hard pressed "little people" who his full-employment strategies were supposed to help.