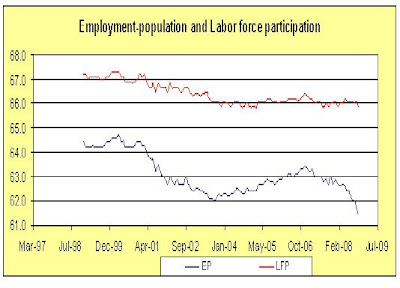 Nonfarm payroll employment fell sharply (-533,000) in November, and the unemployment rate rose from 6.5 to 6.7 percent, the Bureau of Labor Statistics of the U.S. Department of Labor reported today. November's drop in payroll employment followed declines of 403,000 in September and 320,000 in October, as revised. Job losses were large and widespread across the major industry sectors in November ... In November, the labor force participation rate declined by 0.3 percentage point to 65.8 percent. Total employment continued to decline, and the employment-population ratio fell to 61.4 percent.

Over the month, the number of persons who worked part time for economic reasons (sometimes referred to as involuntary part-time workers) continued to increase, reaching 7.3 million. The number of such workers rose by 2.8 million over the past 12 months. This category includes persons who would like to work full time but were working part time because their hours had been cut back or because they were unable to find full-time jobs.

The rise in the unemployment rate sounds bad but the situation is actually worse as the fall in the labor force participation (LFP) rate masked the effect on employment relative to the population (EP). Our graph shows the two series ever since January 1999 to give some context as to how the labor market is faring today as opposed to almost 10 years ago. The need for some sort of aggregate demand stimulus could not be more clear.
Posted by ProGrowthLiberal at 10:26 AM

As I noted chez DeLong, your graphic doesn't go back far enough.

As Spencer noted at AB, if you ignore Presidents named Bush, the lowest (absolute) percentage increase in employment since Eisenhower is Eisenhower's 6.39%.

Both Bushs are much less than half that level. No other president (counting Nixon/Ford together) shows less than double digits.

(Side note: It would probably take Junior some effort to match his dad's 2.40% total, if we ignore that he had two terms to post gains.)