"Any cub productivity theorist can upset the idea by a mere reference to long-time effects on wages; but the unionists were blissfully ignorant of such theories..." 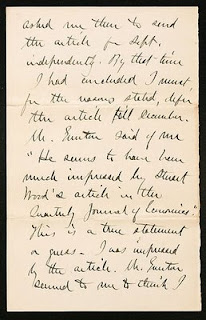 The quote is from Raymond Henry Mussey's "Eight-Hour Theory in the American Federation of Labor" (1927). The image is a page from a letter from John Bates Clark to Franklin H. Giddings in which Clark explains the reason for the delay in publication of his productivity theory of wages.

..By the way I want to tell you in confidence that George Gunton
wrote to the Columbia people proposing to write for them an article
in criticism of my Wage theory. They wrote asking whether I would
rather have it come out before or after my article in the [Political
Science] Quarterly. This was then expected in Sept. I said let Mr.
G.'s article come in Sept. and let me reply in Dec. After thinking
the thing over for a while they concluded not to publish the
symposium or friendly melee at all, and asked me then to send the
article for Sept. independently. By that time I had concluded I must
for the reasons stated, defer the article till December. Mr. Gunton
said of me "He seems to have been much impressed by Stuart Wood's
article in the Quarterly Journal of Economics." This is a true
statement or guess -- I was impressed by the article. Mr. Gunton
seemed to me to think I was a trifle more dependent than I supposed
I was on my good friend's paper. I wonder just a little whether Mr.
Gunton's impression, if such as I surmise is his impression, is a
natural one. Bah! This is an illustration of the essential
littleness and selfishness of the human heart. What does it matter
whether A or B discovered the major part of an economic law, if so
be that it is a law and does a work in interpreting facts of life?...

George Gunton -- who formalized the American Federation of Labor's eight-hour philosophy in a 1889 pamphlet, "The Economic and Social Importance of the Eight-Hour Movement" (which was serialized on EconoSpeak a few months ago) -- was not "blissfully ignorant" of John Bates Clark's productivity theory of wages. On the contrary, Gunton was familiar enough with Clark's theory to write published critiques of it and to detect "impressions" in it of Wood's theory that Clark himself was not entirely aware of.

Posted by Sandwichman at 7:09 PM