Elisabeth Malkin must not have ever heard of Lord Keynes and his General Theory:

But this recession, it is the profligate United States pulling down fiscally disciplined Mexico. Like a host of middle-class countries, from South Africa to Brazil, Mexico is credited by economists with prudent economic policies that reduced debt and tamed inflation, but that has not saved any of them from the pain of a global recession ... When the American economy began to spiral downward, officials here argued that Mexico’s hard-won macroeconomic stability would protect it ... Now, as each week brings more bad news from the United States, those forecasts seem quaintly optimistic. The North American Free Trade Agreement, or Nafta, which so tightly bound Mexico and the United States and turns 15 on Thursday, is helping drag Mexico down with the United States just as it helped bolster it when times were good north of the border. When the American economy was growing, successive governments here counted on foreign investment and exports to generate growth. Exports account for almost a third of Mexico’s gross domestic product. But more than 80 percent of them go to the United States, and when American consumers stop buying, there is no market for Mexican-made big-screen televisions, auto parts or expensive winter fruit.

Well – at least she introduced the open economy aspects. With the peso hovering around 10 pesos per dollar until August 1 of this year (since then it has devalued by about 33 percent), fiscal stimulus in the U.S. led us to import more goods from Mexico which should boost Mexican aggregate demand. As an aside, Dean Baker is not been that impressed with Mexico’s real GDP growth.

Malkin goes onto note that the fall in U.S. aggregate demand has led to a fall in Mexican exports with a concern that Mexico that will also suffer a recession. If that is the case, fiscal restraint is precisely the wrong policy to adopt at this time. 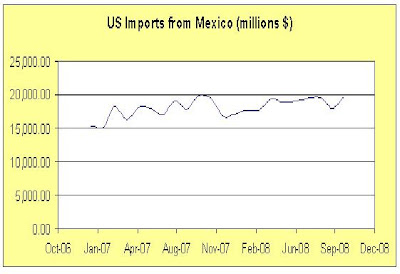 Update: I checked with this source to see if it is true that US imports from Mexico have declined. Our graph shows these imports from January 2007 to October 2008. Maybe economists are forecasting a decline but we had not seen it as of a couple of months ago.
Posted by ProGrowthLiberal at 4:49 AM

For much too long the proceeds of oil sales have been misapplied by the Mexican government. And the land problem in Mexico is even more of an issue. Only the Mexican people can cure the problems of Mexico. NAFTA made the situation worse.

NAFTA ushered in the financial weenies of Wall Street that were behind the consolidation if the small subsistence farms in Mexico. The resulting unemployment was akin to the effects of the "Dust Bowl" in the USA in the 1930's. There was a mass "illegal" migration to the north resulting in injury to the middle class and the peasantry of both nations. The "good" that was to come from the trade deal was far outweighed by the bad.

Henry George fundamentalism may be better applied in Mexico than in the United States. Land Value Taxation along with extraction fees (oil) and lots of outright redistribution are probably the best way to cure the poverty of Mexico and the poverty in most of the nations south of the United States. An increased redistribution of economic rent is the best macro answer in most every case. The proposition knows no context. Even in a rentier society such as Saudi Arabia the blind redistribution makes the people individually accountable for their prosperity as opposed to the State or Church.