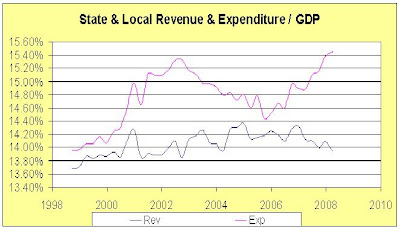 Our graph, which shows the share of GDP from both revenues and expenditures of our state & local governments from 1999 to current, has a surprise – at least for me. While we often hear about the pro-cyclical nature of state & local fiscal policy, expenditures have appeared to be countercyclical – but this might change:

The worst budget crisis in decades is forcing states to cut funding to cash-strapped cities, which already are slashing police, firefighters and other services … In today's recession, both state and local revenues are suffering across the board. In the past 30 years, state spending has grown by an average of 6.3%. States cut a total of 0.1% from their budgets for fiscal 2009, which ends in June; the faltering economy is increasing projected deficits in the coming months. States are facing $30 billion in budget deficits for the current fiscal year, according to the Fiscal Survey of States released this week by the National Governors Association and National Association of State Budget Officers. That figure is likely to grow in the coming months. Twenty-two states, including Georgia, California and Nevada, already have cut spending from their 2009 budget. This week Minnesota's governor and legislators said cities and counties can expect aid to decrease soon. The state is coping with estimated shortfalls of $426 million for this year and $5 billion for the two-year budget period that begins in July. New York Gov. David Paterson's budget proposal, released this week, would cut about $240 million in aid to New York City.

The story continues with all sorts of suggestions as to how to avoid the spending reductions. All good ideas but state & local governments are often restricted from running deficits so the best idea seems to be Federal revenue sharing as the states appear to be ready to reduce their aid to the local governments.
Posted by ProGrowthLiberal at 4:06 PM

The other aspect is not to allow states to cut taxes and let federal revenue sharing fill the gap.

Sounds like the small government republicans are very happy.
I wonder how they are going to like the resulting politics?