Investing in Our Cities

Keynesian macroeconomics suggests that we need some sort of quick but temporary spike in government purchases to get us back to full employment. We would also want to spend these funds on high value projects. I used to drive on Los Angeles roads, which I know need a lot of work. It seems my former mayor is onto something:

Mayors across the country are calling on President-elect Barack Obama to invest in their cities when he takes office in order to get the economy back on track. A group of mayors met in Washington on Monday to lobby for federal funding for what they say are "ready-to-go" infrastructure projects. They want funding to go directly to their cities instead of being distributed on a state level. "Over the last eight years, there's been ... an absence of investment in cities, whether it's the infrastructure, public transportation, bridges, highways, schools, hospitals," Los Angeles, California, Mayor Antonio Villaraigosa said at a news conference on Capitol Hill. "We are here not for a bailout, but to present a recovery plan."

Now that I live in New York, I don’t drive as I ride our subways and my current mayor has chimed in:

The news conference coincided with the Conference of Mayors' release of a list of 11,391 "ready-to-go" infrastructure projects that would cost $73.1 billion. The report surveyed 427 cities across the country and includes roads, bridges, schools, city halls and other public works projects. The report says that those projects would create 847,641 jobs. "All of these projects and more involving our bridges and schools are ready to go. They've gone through the design and approval process. They've gone through all of the political requirements. They just need money," said Michael Bloomberg, mayor of New York City. The president-elect said over the weekend that he supports an economic stimulus plan that includes an overhaul of the nation's roads and bridges. According to a report by the American Association of State Highway and Transportation officials, roads and bridges in the United States need critical repairs that would total $64 billion, and construction could begin within six months if the federal government makes the funds available. That report found 5,148 road and bridge projects that are considered "ready to go." The mayors say that investing in their metropolitan economies is the most direct path to create jobs and jump-start the economy.

One of my big concerns is the proposed cutbacks in subway service and the proposed downsizing of the MTA workforce. It’s not that there is too little demand for subway services but rather a projected MTA deficit that has generated these fiscal contraction proposals. Maybe Mayor Bloomberg can ask the Federal government for some direct revenue sharing so the MTA does not have to initiate these cutbacks. With a little imagination, there are plenty of areas where high value investments in our cities can be found, which would also have beneficial Keynesian effects. The story continues with a debate as to whether having the governors oversea this would lead to a better allocation of resources versus just the slowing the process down.

Of course, I’d rather spend our Federal funds on local infrastructure than more war machines.

Update: I have included a graph showing government spending (Federal, state, and local) on transportation (TRAN) and education (EDUC) as shares of GDP from 1959 to 2007. The 1.8% share for transportation is certainly less than what between 1959 and 1976 with this share declining over time. The education share peaked in 1975 at 5.66% and was 5.4% last year. Whether or not we spend too much or too little on schools, however, cannot be ascertained by anecdotal evidence on how recently a school has been refurbished as one follows Bill Kristol around. 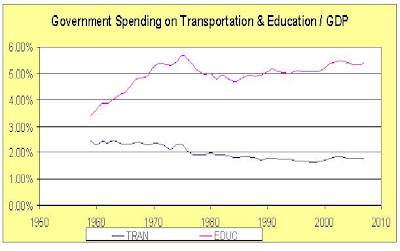 Posted by ProGrowthLiberal at 12:23 PM

The biggest problem with ramping up government projects is the effect that will have currency. The result being rampant inflation. I don't have any answers mind you, the problem is so big we are faced with that I don't think anyone can fix it.

The fix IS inflation. The dollar must lose a lot of its value. The fall of the dollar will meet the real estate prices as real estate is the only good inflation hedge. There is also the trade imbalance to be attended.

The value of the dollar needs to fall because the people that have dollars have far too many of them and we are thus looking at nobility and dynasty. All of this wealth disparity runs counter to justice, freedom, and democracy. The best thing that can happen is for wages to rise sharply and for an extended time. We need wage price inflation very badly. A highly progressive income tax is the politically expedient way to suck the money back out of the system at the correct point.

Bottom side stimulus and the Obama campaign pledge to increase the progressive nature of the income tax are the correct (and the politically correct) mechanism here. There is also need for a rational and reasonable across the board import duty and a tax on carbons both of which should be a straight rebate system (all collected tax rebated as a citizen's dividend or in the same fashion as the previous stimulus).

We already spend too much on transporation. VMT per capita is twice what it was in the 1960s, and it has not made our lives any better, as I point out at http://www.preservenet.com/endgrowth/EndGrowth.html#Neighborhoods.

There is also abundant evidence that the United States has passed the point where spending more on education improves educational achievement, which I have summarized at http://www.preservenet.com/endgrowth/EndGrowth.html#Education.

I advise ProgrowthLiberal to rethink his progrowth position now, rather than waiting until growth brings such severe resource shortages and environmental problems that he is forced to rethink it.