The 1960s - the subversive current continues 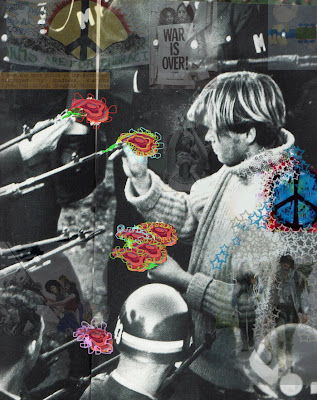 If somebody doesn't bring an end to this suicidal thrust that we see in the world today none of us are going to be around because somebody's going to make the mistake through our senseless blundering, with the dropping of a nuclear bomb somewhere, and then another one's going to drop, and don't let anybody fool you, this can happen within a matter of seconds....But this is were we have drifted, and we are drifting there because nations are caught up with the drum major instinct, 'I must be first. I must be supreme. Our nation must rule the world!' And I am sad to say that the nation in which we live is the supreme culprit. And I'm going to continue to say it to America, because I love this country too much to see the drift that it has taken. God didn't call America to do what she's doing in the world now. God didn't call America to engage in a senseless, unjust war as the war in Vietnam! And we are criminals in that war, we have committed more war crimes almost than any nation in the world, and I'm going to continue to say it! And we won't stop it because of our pride and our arrogance as a nation, but God has a way of putting nations in their place! The God that I worship has a way of saying 'Don't play with me!'

If we are to go forward, we must go back and rediscover those precious values -- that all reality hinges on moral foundations and that all reality has spiritual control.
Martin Luther King, Jr. 1929-1968, Baptist civil-rights leader in the US

Posted by Myrtle Blackwood at 1:23 AM

What seems interesting in that citation is that "practical appeals" are totally of the "left" flavour, while the explicit conclusion in the end is of a strictly "right" kind. It's evident that in today's USA (even much more than elsewhere) those two attitudes are more separated than ever, while both seem to be emphasising "very positive" wishes and values. It's almost like an ultimately stupid dispute of the kind "my good(ness) is much better than yours!". And they are really, severely fighting with each other, those two "notions of good", while in reality I'm afraid both "camps" have a similar tendency to practically demonstrate the other, dark and evil (= destructive) side of their respective convictions (open moral degradation on the left and simplified "enforced morals" on the right). Therefore instead of "theoretical" choice between two competing ideas of promised good, one should rather deal with the real choice between "the least of two evils". Why is it so difficult for you to find a natural combination of progress and moral values, in your best of all possible worlds, exclusively comfortable and prosperous as compared to the rest of the planet? Martin Luther King apparently pretended to have it, but it's difficult to decide now how real could it eventually be... There is no comparable unifying and truly innovative attitude in view, at a time when it's most needed. To cite a close example, the "ecological" fight you maintain, Brenda, together with many others everywhere, is certainly a good one, but ... it's still a fight, opposition, war, where you have true enemies to destroy. But they constitute a large part of the population of the same world and they also have their version of good values and creativity, which is somehow "opposite" to your convictions... A qualitatively different, superior and explicitly unified version of practically efficient good should be found now if your societies want to progress instead of degrading in "competing" directions as it seems to happen today... Call me if you need an advised preacher.

What is 'left' and what is 'right' Andrei?

The right have said they want 'free markets' and then proceeded to allow enormous and sustained intervention in the 'market' by government for many many decades. Starting with monopoly over national currencies and the control exerted in its use. Most so-called leaders on the right overwhelmingly did not object to wars to expand western 'markets' around the globe. And so on.

Right-wing 'leaders' wanted 'moral foundations' and found them at the point of a gun.

Many on the 'left' wanted government intervention in 'the market' whilst many failed to adequately emphasise that that's precisely what we have had all along. The "open moral degradation" of the left? I'm not sure what you are referring to here. Drugs and sex? [Are those generic to the left?]

The 'left-right' dichotomy is a false one. Perpetuated by the two major capitalist parties in order to divide and conquer. Dem-Repubs and Lib-Labs want the contination of the status quo. The 'big lie' of corporatism is to pretend that a choice is available.

"my good(ness) is much better than yours!" Have you seen the movie 'Dogville'. “This preconceived notion that nobody, listen, that nobody can't possibly attain the high ethical standards as you, so you exonerate them. I cannot think of anything more arrogant than that. You… you forgive others with excuses that you would never in the world permit for yourself.

Andrei: "Therefore instead of "theoretical" choice between two competing ideas of promised good, one should rather deal with the real choice between "the least of two evils."

Yes and no. To redirect the audience's attention away from abstractions like 'socialism', 'capitalism', 'communism', 'nationalism', 'globalism' and onto the concrete reality such as corruption, theft, violence and deceit in high places. The ignorance and cruelty below.

To discover that the 'lesser of two evils' may be to accept an extremely painful outcome at times ('enlightened self interest).

Andrei: "they also have their version of good values and creativity, which is somehow "opposite" to your convictions...

You think the battle is between those with convictions and those with different convictions? I don't think this is the problem at all. It seems that most people can't (or won't???) associate their actions - consumerism, patriotism etc - with the reality on the ground. They can't (or won't) see the forests that are destroyed for the woodchips to make the newspapers, magazines and packaging. They are led to believe they're off-the-hook if they buy 'forest-stewardship-certified' printer paper. That some form of representation of the majority takes place in national elections that are rigged behind the scenes and remote from local communities. Some people think that America is a great and successful nation because its industry is so 'effcient' and 'competitive', etc.

The 'war' may be fought in the field of information and understanding. (But I pray mostly for a higher power to intervene).

It is not an ideological battle.