"Hegel remarked somewhere that all great world-historic facts and personages appear, so to speak, twice. He forgot to add: the first time as tragedy, the second time as farce." 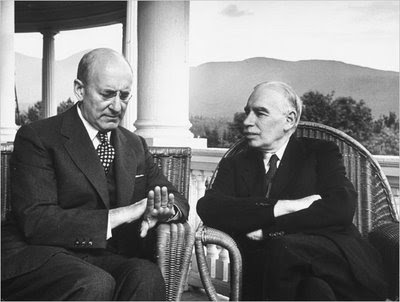 The same Alfred Eisenstaedt portrait of Henry Morgenthau and John Maynard Keynes, seated in wicker chairs at Bretton Woods in 1944 appeared yesterday in the Globe and Mail and today in the New York Times. In it, Morganthau appears to be inspecting his fingernails. Keynes looks bored.

In the Globe and Mail, the photo accompanied a story about the call by France's Sarkozy, Germany's Merkel and the UK's Brown for a new international financial order. The Times story briefly mentioned Sarkozy's ambition to "rebuild the foundations of the financial system" but didn't elaborate.

My question, assuming that the "tradition of all dead generations weighs like a nightmare on the brains of the living," is: who gets to play Keynes in this particular sequel? Sarkozy?

The United Nations Monetary and Financial Conference, as the Bretton Woods confab was officially known, convened in June, 1944. In April 1945 JMK wrote to the poet, T.S. Eliot outlining three "ingredients of a cure" for unemployment. The first two were investment and expanded consumption. The third and "ultimate" solution, in Keynes's view was working less. Yes, that's right. Keynes saw the reduction of working time as a more enduring policy approach than either investment or consumption, which in his view had important short term impacts.

The 1945 letter wasn't a fluke or an aberration. In May 1943, Keynes prepared a memorandum on "The Long-Term Problem of Full Employment." In it he projected three phases of post-war economic performance. The first two phases involved investment for stabilization, reconstruction and expanded consumption. During the third phase (estimated to begin some 10 to 15 years after the end of the war): "It becomes necessary to encourage wise consumption and discourage saving, -- and to absorb some part of the unwanted surplus by increased leisure, more holidays (which are a wonderfully good way of getting rid of money) and shorter hours."

So the June 1944 Bretton Woods Conference took place almost precisely mid-way between two declarations by Keynes -- in May 1943 and April 1945, respectively -- that reducing the hours of work should be a key policy element in a post-war, full-employment economy.

Posted by Sandwichman at 4:29 PM