In 1995, following several years of "jobless recovery", Jeremy Rifkin's The End of Work was published and became a short-lived sensation. There was nothing new in Rifkin's central thesis of intractable technological unemployment. But the timing of his book seemed impeccable. For a while. Then a funny thing happened. The fantastic American job-creating machine fired up and talk about the end of work receded.

That "job-creating machine" was a centralized policy response to stagnation, not some inherent dynamic feature of free-market capitalism. The following graph by Paul Krugman shows the timing and effect of the Greenspan bubble machine. 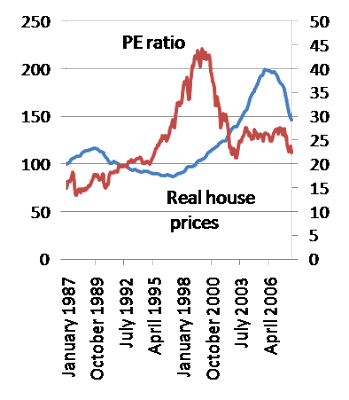 Absent a new bubble, the collapse of the house price bubble brings us back to the question of technological unemployment or "the end of work" as Rifkin put it. Apologists for capitalism will be rooting for a new bubble. But is a new bubble even feasible? I say no, at least not for a considerable period of time. Bubbles are a confidence game. That is, they rely on widespread confidence that they are not bubbles. Too much learning has occurred over the past year for a new bubble to be able to take hold. Maybe after several years of forgetting...
Posted by Sandwichman at 1:28 PM

There may be an end to real-work jobs because of technology but there will always be make-work jobs that miracuoulsy disappear when the economy tightens up. What if we all ate out, three meals a day?

We could all take in each other's laundry. Seriously, though, productivity doesn't have to be a problem. We could have more free time. Or we could have unemployment. I guess freedom is still the prospect that scares people the most.

there was a time when futurists looked forward to a time of increase leisure-free time due to rising technological productivity. It was almost taken for granted that the gains of such productivity would be widely shared. That seems naive now. But the prospect of the end of the work ethic or the end of the work-reward ethic Doesn't even seem to be part of the Zeit Geist- although the Spirit is giving us plenty of hints- or winks and nods.

I had read Kurt Vonnegut's "Player Piano" long before reading "The End of Work." "Player Piano" was Vonnegut's first novel, as I recall, published in the late 1940s. The theme of Vonnegut's novel seemed quite similar to Rifkin's 1995 publication. I reread "Player Piano" every few years for perspective. I recently learned that Vonnegut based his novel on earlier writings of others. Of course, as a novel, Vonnegut demonstrated through the eyes of an individual "hero" what happens, or can happen, when individuality is diminished. Who were the writers preceding Vonnegut on this theme, whether of fiction or non-fiction? Is there a compilation of futurists available to examine the subject historically?