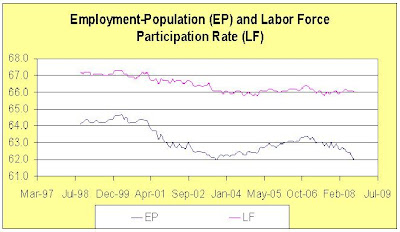 Nonfarm payroll employment declined by 159,000 in September, and the unemployment rate held at 6.1 percent, the Bureau of Labor Statistics of the U.S. Department of Labor reported today. Employment continued to fall in construction, manufacturing, and retail trade, while mining and health care continued to add jobs.

No one doubts the work ethnic of Americans. The problem is that the economy is not generating sufficient aggregate demand to fully utilize this work ethnic.

Payroll employment has declined by 760 thousand since December 2007. While the unemployment rate did not further increase last month, that’s not because of any good news from the household survey of employment which showed a 222 thousand decline last month alone. We should note that the employment-population ratio fell from 62.1% to 62.0% but that was accompanied by a decline in the labor force participation rate from 66.1% to 66.0%. Palin does not seem to be attributing this decline to less work ethic and she’s likely correct as this decline is more likely due to a discouraged worker effect.

The next Administration needs to recognize that these hard working Americans want new job opportunities. Alas, I did not hear very much from Governor Palin last night as to how a McCain Administration would go about accomplishing this goal.

Update: John McCain has responded to the labor market news and proposes that we cut government spending as a means for increasing employment. Lord Keynes must be rolling over in his grave!
Posted by ProGrowthLiberal at 11:45 AM