Components of GDP Growth Since 2000 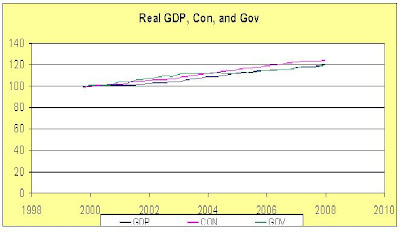 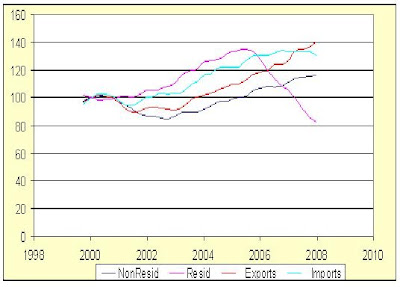 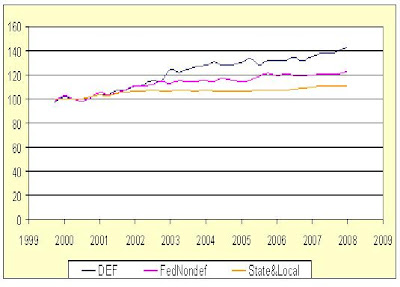 If a picture is worth a thousand words, let’s present three of them – each of them drawing from the real GDP index numbers presented in NIPA table 1.1.3 from this source. Real GDP is about 19.5% higher than it was in 2000, which translates into an annual growth rate just over 2.3%. Not exactly what I would call a Bush Boom. Our first graph shows a couple of things. Private consumption (Con) grew more rapidly than GDP, while government purchases at first grew more rapidly but ended up being only 19.6% higher than we observed in 2000. One could say we got fiscal restraint towards the latter part of the Bush administration just as we had to worry about a possible recession.

At the end of the day, however, national savings as a share of GDP has declined since 2000 but the components are fascinating. Export demand started weak but rebounded rising by over 40% during the period. Offsetting that, however, was the over 30% increase in imports. Business or nonresidential investment (Nonresid) began with a decline but eventually rose to 16.2% of its 2000 level. So business investment actually declined relative to GDP despite all those tax breaks designed to give us some sort of supply-side miracle. And the big news is that residential investment, which was almost 35% higher in 2005 than it was in 2000, has plummeted to less than 83% of its 2000 level.

And yet, the White House can send Dana Perino out to say this:

Ms Perino said Democratic leaders in Congress had floated ideas – such as infrastructure spending and help for state and local governments – that “we did not think would actually stimulate the economy, so we would want to take a look at anything very carefully”.

The election is only two weeks away and then this incompetent crew will be lame ducks!
Posted by ProGrowthLiberal at 1:49 PM

so, i guess since gdp has gone up by 20% in 8 years, we are also 20% better off than we were 8 years ago. and if we don't think so, that must be a mental problem in need of therapy (probably meds). think of all the meds, shrinks, prisons, surveillance technology, GHGs, wars and other improvements we have to be thankful for.

gus speth at yale has a recent (redundant, in the sense of h daly or even thorsten veblen) critique of growth recently.

i personally think more bubbles are needed to boost growth even more.