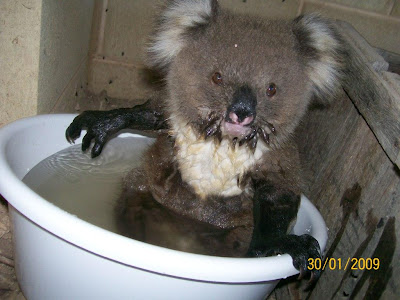 The image on the right is of a koala in South Australia that sought refuge from the extreme heat this last fortnight by climbing into a tub of water in a resident's back porch.

This week 60 percent of the northern Australian state of Queensland is subject to flooding while the Southern state of Victoria is scorched with unprecedented record temperatures of 43 degrees Celsius. Tomorrow’s temperature is expected to reach 44 degrees in Melbourne and 46 degrees in rural Victoria, making it the hottest place on the planet. This extraordinary and unprecedented heat, combined with strong dry winds, is expected to worsen the fires in industrial tree plantation and native bush already raging in this state. The high temperature is also expected to lead to yet more large power blackouts so there’s a question mark tomorrow as to whether residents will be able to relieve their heat-stress by switching on their fans or air conditioners…or even their fridges? [1] Last Friday “half a million homes and businesses were blacked out, and patients were turned away from hospitals.” [2] The number of bodies being stored at the city’s morgue is witness to the fact that over three times as many people are dying at this time. [3]

The Melbourne heat has also caused an electricity substation to explode. That shut down the city's entire train service, trapped people in lifts, and blocked roads as traffic lights failed. [2] Further severe disruptions to the city’s train system is expected tomorrow as well and this is exacerbated by railway lines warping and becoming unusable as a result.

Victorian farmers have lost many crops this summer as vegetables died from the heat and fruit crops stewed on the trees. The situation for them was already bad. Last October it was reported that “a combination of high temperatures and close to no rainfall” had meant that “hundreds of farmers had then reached the point of no return.” The Mallee, Wimmera and north-east wheat crops were destroyed by a combination of the heat and dry winds and low irrigation allocations were then placing a question mark over continued production in the Victorian horticulture and dairy industries this summer. [4]

Even in my normally mild Tasmania the state suffered its second-hottest day in a row, as temperatures reached 42.2C in some areas. “Two days before, Adelaide hit a staggering 45.6C. After a weekend respite, more records are expected to be broken this week.” [2] Fish populations are under stress in the Murray-Darling Basin of Victoria, New South Wales, South Australian and Queensland. Low water levels and hot temperatures have resulted in fish kills in parts of the system. Water shortages also pose risks of algal blooms and severe damage to the ecosystems. [5]

Climate Change Minister Penny Wong said the record heat is yet another sign of global climate change scientists have forecasted."Eleven of the hottest years in history have been in the last 12, and we also note, particularly in the southern part of Australia, we're seeing less rainfall," Wong told reporters."All of this is consistent with climate change, and all of this is consistent with what scientists told us would happen." [6]

Many people around me are trying to change the way they live. They have a creeping conviction that they will not survive unless quick change occurs and have stopped waiting for government to take the lead. I pray that it’s not too late?

"Despite the very serious nature of the threat to environmental preservation, the inherent inertia of our system will probably block effective action at least until public concern is galvanised by some catastrophic disaster."

Posted by Myrtle Blackwood at 10:51 AM

For those not up on their Celsius scale, 46 degress Celsius is about 115 Fahrenheit.

46 degrees is scorching hot. Ice cream vendors and air condition stores must have made a fortune during that heat wave filled summer. How was the winter? I have heard from some friends that at some places, winter was relatively warm as well.