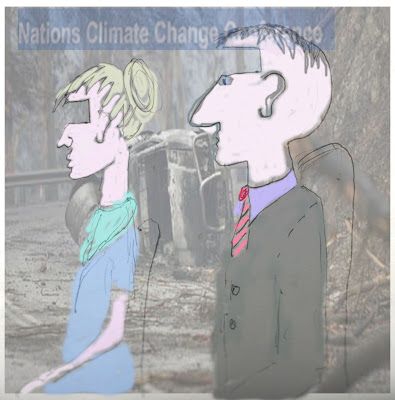 Piece One:
Global models that include the feedbacks between climatic change and the carbon cycle have all shown decreased carbon sinks over the next century. [1]

Piece Two:
Growing trees absorb net quantities of CO2, and the higher levels of CO2 and nitrogen in the atmosphere are themselves stimulating tree and plant growth…. But the researchers expect these effects to reach saturation point and cease to have an effect. [2]

Piece Three:
What the researchers found limited the trees' capacity to respond to carbon fertilisation was a shortage of other nutrients, especially nitrogen. The availability of water was also important. ….The US and the other members of the so-called Umbrella Group (Japan, Switzerland, Canada, Australia, Norway, New Zealand and Russia) wanted to rely considerably on sinks in meeting their Kyoto targets for reducing emissions of greenhouse gases that may be warming the global climate. The European Union and others opposed this, arguing that open-ended use of sinks to absorb CO2 could allow countries to avoid making any actual emission cuts at all. [3]

Piece 4:
[Tree] respiration increases in response to temperature rises, which are triggered by the rising levels of CO2. Many scientists believe that respiration may be about to accelerate, turning the forests from sinks to sources of carbon…. They failed to recognise that this could happen because, although CO2 take-up is instantaneous, the warming that triggers respiration has a built-in delay of about 50 years, mainly because of the oceans' thermal inertia. So planting more trees could soon prove a quick way of speeding up climate change, not of moderating it. Bob Scholes, of the South African Government's research agency, CSIR, says it could be a costly mistake. "The carbon cycle has a very long equilibrium time. The consequences of actions taken now will persist for many centuries." [4]

[4] Trees 'will not avert climate change'
Wednesday, October 20, 1999 Published at 22:49 GMT 23:49 UK
Sci/Tech
The world's forests can buy a little time, before they start adding to the warming
By Environment Correspondent Alex Kirby
http://news.bbc.co.uk/2/hi/science/nature/480339.stm

Posted by Myrtle Blackwood at 9:29 AM

Thanks again for reminding us of the environment. My brother and I are both interested in and worried by ecological changes. In the past my brother has tried to cheer me up by pointing out the bright side of environmental collapse. (1) Florida will go underwater. (2) Neither of us has children to worry about, and we will both be dead before the excrement really hits the air circulation device.

At this point, I think we will both be alive. The changes are happening really fast.

I do not know how capitalism can fix these problems.

Hi Eleanor,
there doesn't appear to be much in the way of escape for the majority of us. An underground bunker is the best I can come up with but this 'solution' hardly addresses the exposure of food crops to extreme temperatures etc. Widespread famine is on the cards.

Hadn't thought about the bright side of environmental collapse. mmmmm... a lot of TNC headquarters will go underwater. People will be forced into local production and then bang goes this horrendous form of globalisation. There'll be a renewed respect for nature. . .