China on the Buy American Provisions

AP reports on an editorial from the Xinhua News Agency:

Measures in a $789 billion U.S. stimulus package that favor American goods are a "poison" that will hurt efforts solve the financial crisis, an editorial by China's official news agency said. Provisions in the U.S. stimulus bill approved Friday favoring American steel, iron and manufactured goods for government projects are protectionist measures that could trigger trade disputes, said the editorial issued late Saturday by the Xinhua News Agency. "History and economics have told us, facing a global financial crisis, trade protectionism is not a solution, but a poison to the solution," the editorial said. U.S. labor groups that pushed hard for inclusion of the measures have argued that their main purpose is to ensure that U.S. Treasury dollars are used to the fullest extent to support domestic job creation. China has promised to avoid "Buy China" protectionist measures in its own multibillion-dollar stimulus effort, and appealed to other governments to support free trade.

I suspect that Robert Scott will find this claim that China is an advocate of free trade hard to shallow:

The growth of U.S. trade with China since China entered the World Trade Organization in 2001 has had a devastating effect on U.S. workers and the domestic economy ... A major cause of the rapidly growing U.S. trade deficit with China is currency manipulation. China has tightly pegged its currency to the dollar at a rate that encourages a large bilateral surplus with the United States. Maintaining this peg required the purchase of about $460 billion in U.S. treasury bills and other securities in 2007 alone. This intervention makes the yuan artificially cheap and provides an effective subsidy on Chinese exports. The best estimates place this effective subsidy at roughly 30%, even after recent appreciation in the yuan (Cline and Williamson 2008).

While Greg Mankiw wants to pretend that “China favors free trade, even if U.S. doesn’t”, one has to wonder if he also endorses the Chinese government’s policy of maintaining an undervalued yuan.

Barack Obama's calls for changes in China's yuan policy may put the president-elect on a collision course with the U.S.'s second-largest trade partner, which is holding the currency stable to support its export-led economy. Obama said China must stop manipulating the currency in a letter to the National Council of Textile Organizations released on Oct. 24. The People's Bank of China has kept the yuan almost unchanged against the dollar since mid-July as it shifts focus from countering inflation to sustaining growth amid a global credit crisis. The Foreign Ministry said last week the U.S. shouldn't blame its trade deficit on exchange rates.

It would seem that government officials in both nations view the exchange rate as part of the overall trade policy stance. 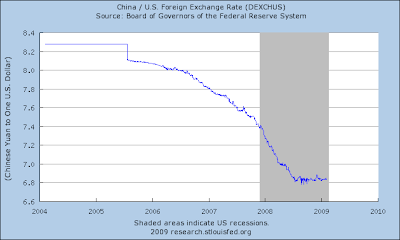 Posted by ProGrowthLiberal at 12:41 PM

Look, many countries "manipulate" their currencies, any country that does not engage in absolute floating rates, and that is a majority of the world's countries.

So, what is the criterion that those who bash China wish to impose as a test that they are not manipulating in an inappropriate way? A bilateral trade balance? Given the massive difference in savings rates in China and the US, even if the forex rate were at PPP (the usually proclaimed long run equilibrium), they would still run a bilateral surplus.

BTW, there is no international treaty that says countries must freely float, much less that they must adjust so that they have a bilateral trade balance with the US specfically. China runs bilateral trade deficits with quite a few countries, even as they run a large surplus with us.

Sure, a cutback by them might not have too much impact on us, although they do import a lot from us in aggregate amounts. But nobody should be under some delusion that this "buy American" proviso in the stim is a good thing. The rumblings out of China are just the tip of the iceberg.

I think "overvalued yaun" is a misprint or a mistake. Of course, it is also quite possible that everything I ever thought I knew about monetary economics is simply wrong.

If the Chinese use the dollars sent to China for the purpose of buying T-Bills then China is increasing the value of dollars by not spending these dollars. Such purchases force the Fed to issue the T-Bills and remove the dollars from circulation.

Meanwhile, the value of the yaun is decreased if it is used to purchase any global goods. The yaun paid out will be used by non-Chinese to buy more Chinese goods. Thus the value of the yaun is kept low when compared to the dollar. This is at least one of the reasons that floating currencies do not actually work. Only with tariffs does each sovereignty control its own destiny and only when each sovereignty does so do we have anything even approaching the concept of workable markets between sovereignties.

We cannot force the Chinese to spend the money we send them. At this point however, substantially and abruptly raising tariffs is like slamming the door after the fox took a lot of the chickens. The only way to outfox the fox is to make some more chickens while slowly closing the door. If the Fed is forced to monetize the stimulus and the bailout then the fox will find that the chickens he has taken are not very tasty.

Did not catch that, but indeed, those who complain about Chinese currency manipulation argue that they are holding their currency at an undervalued level, which supposedly allows them to sell us lots of stuff while they do not buy enough of ours.

Barkley - fair point but Cline and Williamson sort of anticipates your points by estimating their FEER (fundamental equilibrium exchange rate) which they put at 5.45 yuan/$. If they estimate is reasonable, the current rate of 6.83 yuan/$ suggesting the Chinese "are holding their currency at an undervalued level".

Back in 2005 I could get 8.x Chinese hula hoops for a dollar. And now I can get only 6.8 of them for that same dollar. That says that the yaun has been getting stronger and the dollar weaker over the period. But what we should see right now is about 4 hoops for a dollar. In mid 2008 the Chinese started pegging the yaun to the buck again. They do this by buying T-Bills with the dollars we send to them for the hula hoops. They are "saving" up dollars instead of spending them. A trade war would be a very good thing for the American middle class (depending on what is done with the proceeds from an import duty). We can't make them stop saving. All we can do is withhold the funds. I would rather get the dough we need using a tariff than to send them money just to borrow it back.

"A trade war would be a very good thing for the American middle class" - Trucker. Let me suggest a modification of this statement. A trade war might be a good thing for workers in the import competing sector but it would not be a good thing for workers in the export sector. The case for $ devaluation over trade protection goes something like this: $ devaluation raises net exports by increasing (rather than decreasing) US export demand. Sort of a battle between US Steel v. Catepillar as shown in a recent Sixty Minutes show.