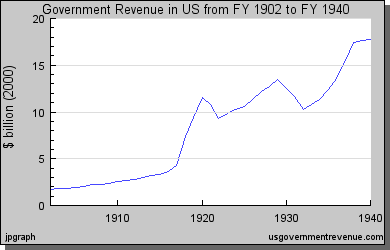 Jim Powell wants us to believe that reducing the size of the Federal government is the key to getting the economy back to full employment:

Spencer spots a flaw in Powell’s reporting of GDP:

So with prices falling during this period, the decline in any real variable is less than the decline in the reported nominal variable, which should hold for those reported declines in government spending and tax figures. Alas, Spencer only tells us the qualitative direction of the general price level, which of course is a lot more informative than the disinformation from Mr. Powell. This source, however, lets us know that the CPI fell by 10.85% in 1921 and 6.1% in 1922. In real terms, Federal spending and taxes were still lower in 1922 than they were in 1920, but Powell’s abuse of nominal figures greatly exaggerates not only the size of the post World War I recession but also the size of the decline in Federal spending and taxes.

Then again, it is not unusual to see Federal spending and taxes fall after a major war. Our chart was created using information from this source and shows total government revenue in real terms (2000$) from 1902 to 1940. The size of the government during the years preceding World War I appears to be a lot smaller than the size of the government in 1922. And we should note that real Federal revenues rose for the rest of the 1920’s eclipsing real Federal revenues in 1920.

Spencer is right – Jim Powell has put forward a lot of disinformation in his National Review column. But that is nothing new for those who write for the National Review!
Posted by ProGrowthLiberal at 11:29 AM

And all of this is ignoring the substantial borrowing for roadworks at state and local levels in much of the 1920's ... having a Federal system of government only recognized in the fact that you remember to label "Federal Government Spending" but then proceed to treat it as if it was Total Government Spending is a wonderful rhetorical sleight of hand of its own.

HOW DO YOU DO... THE ECONOMY

Men in stupid suits wearing even stupider construction jackets waving bits a paper shouting about numbers. Much more complicated. Putting all your trust and wealth in the hands of what amounts to be a rabble of coke enthusiasts on sat nav shortcuts to penthouse plaza’s; trying to make things go up and down so their killlionaire clients can keep buying goal scoring Brazilian rapists is a sensible and rational way to run a world. Too simple?

The good ol bait and switch. Say his result is exaggerated and then conclude it is wrong.