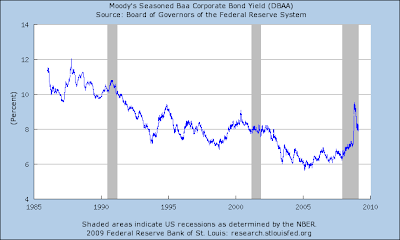 While President Obama is about to sign a bill that provides significant fiscal stimulus for the ailing U.S. economy, most economists would likely argue that this is a necessary but not sufficient condition for restoring full employment. Ben Bernanke made the following observations on January 13, 2009:

The abrupt end of the credit boom has had widespread financial and economic ramifications. Financial institutions have seen their capital depleted by losses and writedowns and their balance sheets clogged by complex credit products and other illiquid assets of uncertain value. Rising credit risks and intense risk aversion have pushed credit spreads to unprecedented levels, and markets for securitized assets, except for mortgage securities with government guarantees, have shut down. Heightened systemic risks, falling asset values, and tightening credit have in turn taken a heavy toll on business and consumer confidence and precipitated a sharp slowing in global economic activity. The damage, in terms of lost output, lost jobs, and lost wealth, is already substantial.

We noted that the credit crunch is consistent with being in a liquidity trap as Paul Krugman also noted:

The Federal Reserve has responded aggressively to the crisis since its emergence in the summer of 2007 ... As indications of economic weakness proliferated, the Committee continued to respond, bringing down its target for the federal funds rate by a cumulative 325 basis points by the spring of 2008. In historical comparison, this policy response stands out as exceptionally rapid and proactive … Although the federal funds rate is now close to zero, the Federal Reserve retains a number of policy tools that can be deployed against the crisis ... Other than policies tied to current and expected future values of the overnight interest rate, the Federal Reserve has--and indeed, has been actively using--a range of policy tools to provide direct support to credit markets and thus to the broader economy. As I will elaborate, I find it useful to divide these tools into three groups. Although these sets of tools differ in important respects, they have one aspect in common: They all make use of the asset side of the Federal Reserve's balance sheet. That is, each involves the Fed's authorities to extend credit or purchase securities.

The chairman of the Federal Reserve went on to describing in some detail these non-traditional monetary policy tools. The fact that interest rates on short-term government debt fell from around 5 percent in early 2007 to near zero now – with longer-term rates falling from around 5 percent to around 3 percent at the end of 2008 is testimony that the Federal Reserve did all it could do using conventional monetary policy and yet interest rates on BAA rated corporate debt rose from just over 6 percent as of late 2006 to around 9.5 percent towards the end of October 2008. While the beginning of the recession preceded the enormous spike in interest rates on BAA rated corporate debt, the panic signals over the credit crunch were the result of the unprecedented surge in credit spreads towards the end of 2008.

The title of this post suggests that watching the BAA interest rate may be a decent proxy for the success of non-traditional monetary policy. It is a metric that can be followed on a daily basis and is readily understood. If the proximate problem is high credit spreads and if investment demand is sensitive to the BAA interest rate, then this metric should be closely related to the policy problem and how it gets transmitted to the real economy.

So if one accepts my premises that the BAA interest rate is a good metric for the success of non-traditional monetary policy – how are we doing? I would submit that we have seen some – but not nearly enough – success. After all, an interest rate of 7.9 percent is not as burdensome as an interest rate of 9.5 percent. However, these interest rates are still quite high.
Posted by ProGrowthLiberal at 1:03 PM

There needs to be some adjustment. Many AAA firms are now down rated and so the type of firm that got a low bond rating has shifted somewhat.

This means that the pool of firms has shifted. Perhaps it is appropriate to think of many blue chips as now having weakened financial positions, but I just can't lump firms such as Alcoa in with the typical go-go firm that used to be the ones in this category.

Having a few poor years while you still are in possession of a huge capital investment and resource deposits is a different matter than being say, Macy's, which depends upon a continual flow of sales to deal with its debt.

Perhaps I'm just unwilling to acknowledge the new reality, but I think the ratings agencies are too focused on short term measures and this distorts their decision making.

Even with such an adjustment, I think the major point being made would still hold true, however.